A Catholic University production of Measure for Measure will take place inside of a Zoom video chat after the spread of coronavirus led to events being canceled. 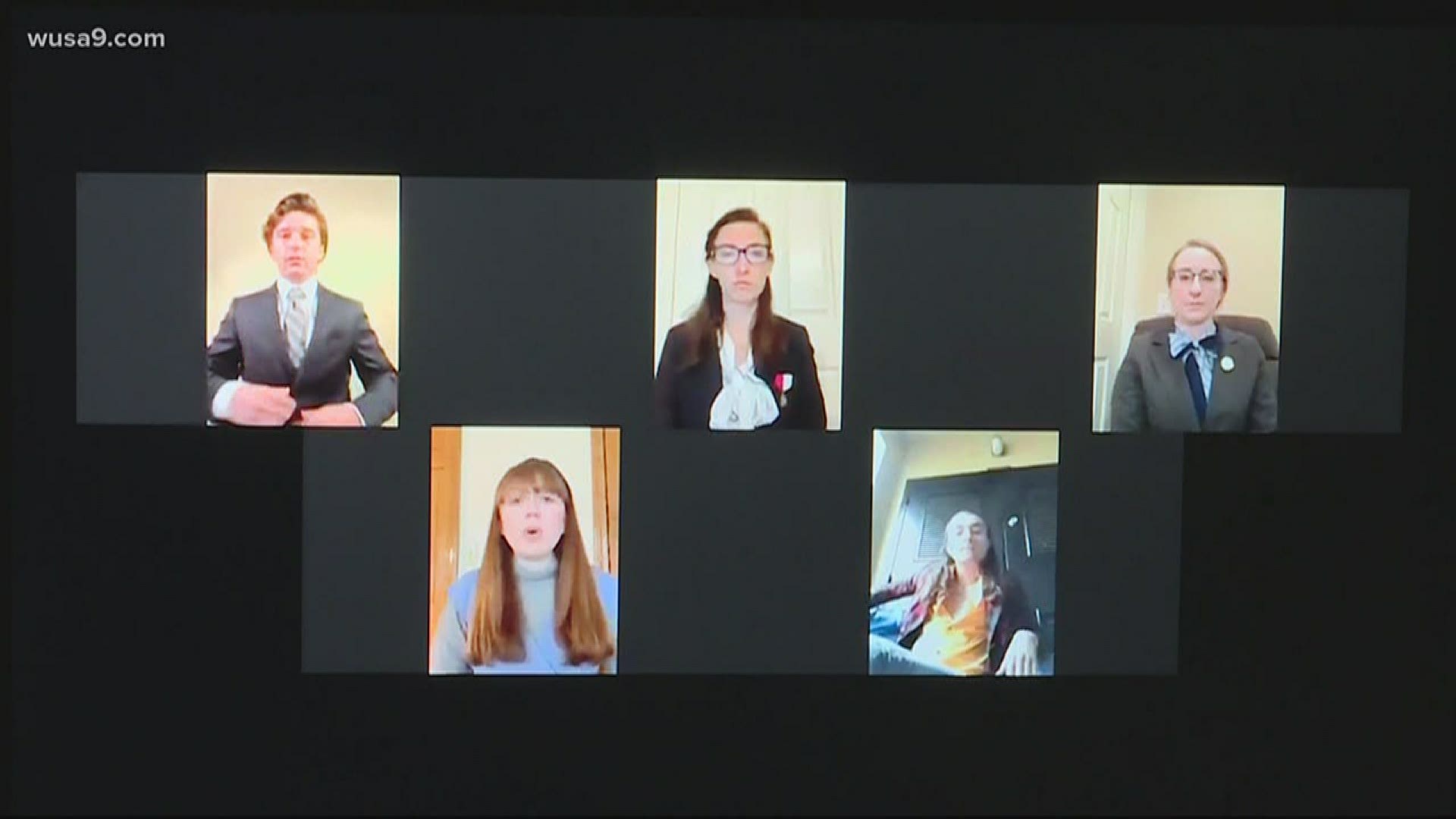 WASHINGTON, D.C., USA — As William Shakespeare famously said, " All the world's a stage."

On Thursday night, the YouTube channel for Catholic University's Rome School of Music, Drama, and Art served as the performing arena for the cast and crew of the school's "Measure for Measure" production.

The play was cast and organized for weeks heading into Catholic University's spring break this year before the spread of coronavirus impacted nearly everything.

The production was no exception as school leaders canceled all campus events starting March 18.

For play director and chair of the drama department, Eleanor Holdridge, the announcement only meant a change of scenery.

"So many students left their books, their scripts, everything," she said. "When you do a Shakespeare play, you need all these other materials. All of that was left in school. I just woke up and all I could think of is this show has to go on."

What followed were weeks of the cast and crew meeting inside Zoom chat rooms, holding rehearsals and read-throughs all through a virtual setting.

"It’s very different turning it into all the things you need to do for a radio play, like signaling absence and creating what the location is," Holdridge said. "The costume designer actually took virtual tours of the cast members wardrobes."

For senior Marie Kottenstette, who plays a lead role in the production, the move to the digital play brought a mix of emotions.

"We were all so ready, so to have it stop was hard,"  Kottenstette said. "However, I think we were just grateful to have the opportunity to do something with it.”

Kottenstette said that adjusting to the digital realm also brought some new challenges, including having to perform without a live audience.

"You’re reacting to someone who’s not in the same room as you, and you also can see your own face, which is weird because normally you can’t see your own face when you’re acting," she said. "You have no one to feed off of except for the scene partner that’s on the screen next to you. You almost have to imagine that the audience is there."

With a recorded virtual version of the show shown on Thursday in honor of Shakespeare's birthday, the senior said she was thankful the cast and crew had an opportunity to perform.

"I think that is really the important part is that we’re still presenting art for people," Kottenstette said. "We’re just doing it differently."

"Measure for Measure" tells the story of a young aspiring nun named Isabella, who is confronted with a difficult decision when trying to save her incarcerated brother from death.

Kottenstette, who plays Isabella in the virtual production, believes the play touches on themes that people across the country are currently experiencing during the spread of coronavirus.

"She gets ripped out of her home and replanted in a totally different situation that she wasn’t prepared for at all, which is kind of what a lot of us are going through," Kottenstette said. "A lot of the choices that she makes in this play aren’t actually made by her. She’s getting told to do a lot of what she ends up doing. A lot of people are controlling the decisions that she’s forced to make and I think that’s a little bit how all of us are feeling right now."

With the play set to be shown to a virtual audience this week, Holdridge said she was proud of the hard work and resilience of the cast and crew.

Anyone interested in seeing the play can visit this link.

RELATED: What happens to movie theaters during the pandemic?

RELATED: 3D virtual reality video allows you to fly through the lungs of a coronavirus patient